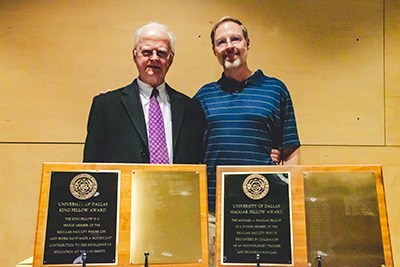 In 1981, the Carl B. and Florence E. King Foundation and the Haggar Foundation helped create the King/Haggar Faculty Development Endowment, which made both the King Fellow and Haggar Fellow Awards possible and included funding for summer research stipends. Each year since 1985, UD’s faculty have gathered at the beginning of the spring semester for the prestigious awards ceremony to recognize and honor fellow faculty who have gone above and beyond in their commitment to the university and to their students. Both awards, which are selected by the faculty development committee from faculty nominations, are considered the highest faculty honors, and recipients must have made significant contributions to the university through scholarly work and excellence in teaching, in addition to being exemplary colleagues.

“The UD mission and Core Curriculum are sometimes described in terms of the twin pillars of Western civilization, Athens and Jerusalem,” said 2019 King Fellow and Associate Professor of Theology Mark Goodwin, Ph.D., giving the traditional King Fellow address as the previous year’s King Fellow at this year’s ceremony on Jan. 21. In his address, Goodwin explored the nature of Jerusalem, which has been central to his own studies.

“One could think here of the church as embodying the synthesis or marriage of Athens and Jerusalem, and many of us here today are the spiritual offspring of that marriage,” he said. “And of course this Catholic marriage/synthesis is reflected in the liberal arts character of the UD curriculum.”

Appropriately, the 2020 Haggar Fellow is known to be a particular proponent of this liberal arts character, as well as of the Catholic nature of the university. Associate Professor of Computer Science Robert Hochberg, Ph.D., is “a highly enthusiastic, innovative, and lively teacher”; he frequently sits in on classes from other disciplines in order to better understand these disciplines and how they relate to his own.

“His leadership in his major has reinvigorated a program, inspiring many students,” said Provost Jonathan J. Sanford. “His classes are known for their difficulty, and for the ingenuity of the assignments.”

According to one of Hochberg’s students, “He takes interest in both academic and general interests of his students and even those who aren't his students. His joy for learning transcends his area of study and is infectious. He challenges one’s faith, position and ideas in order to strengthen them, encourage growth of range of ideas, and cultivate better academics.”

While the Haggar Fellow is awarded to a junior faculty member who has taught full time at UD for eight years or fewer, the King Fellow goes to a senior faculty member who has taught in a full-time capacity for more than eight years. This year’s King Fellow is known for his extraordinary commitment to the university, to the Core Curriculum and especially to the students. “Equanimity and gentlemanly flair” are hallmarks of Chair and Associate Professor of Classics David Sweet’s character, as he champions the Institute of Philosophic Studies, the undergraduate and summer high school Rome programs and, of course, the liberal arts.

“Students seek out courses with Dr. Sweet regardless of subject, marveling at his stories of experience abroad and relishing in his lively narratives of ancient history,” said Sandford. “His attention to etymology in his elementary courses takes students beyond Greece and Rome to the origins of language itself; his Platonic readings of Homer inspire deeper consideration of the text, but his insistence that students memorize 50 lines of whatever text they are reading has been his practice for at least 20 years, a practice that Louise Cowan herself had advised as well.” 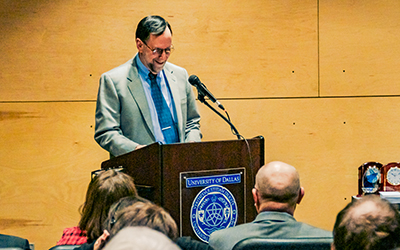 Additionally, the 2020 Haggar Scholar Awards, which provide faculty research funding, were presented to:

Further, the 2020 Haggerty Teaching Excellence Awards — supported and made possible by the Patrick & Beatrice Haggerty Foundation and determined by student and alumni votes — recognized the following faculty for their dedication to and excellence in teaching:

“It was the Haggerty Family Foundation and Pat Haggerty’s great desire to honor teaching excellence at the University of Dallas that he witnessed as a student and as a member of the Board of Trustees that led to this addition to our faculty awards,” explained Dean of University Libraries and Research Cherie Hohertz, who presented these awards. 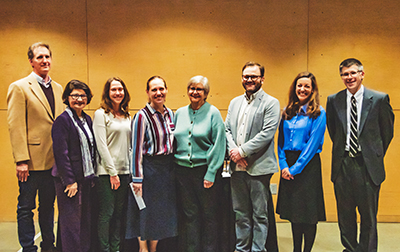 Finally, the following faculty were recipients of sabbaticals and leaves for the coming academic year:

Support our faculty through a Faculty Excellence Fund such as those that make these awards possible.