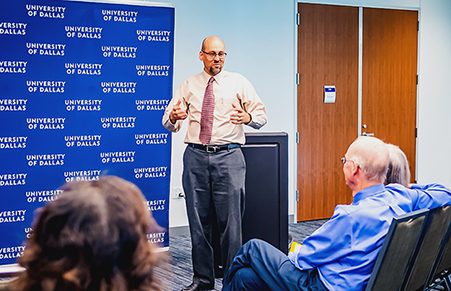 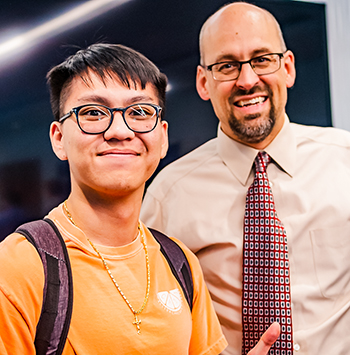 “A celebrated teacher and trusted colleague, David Andrews has served the University of Dallas in a number of roles over the years. I am deeply grateful for his generous willingness to serve Constantin and the entire university," said Hibbs. “His experience, patience and devotion to our mission, paired with the guidance and assistance of Daniel Burns, will be of great benefit to us all.”

“Though the next year promises to offer many challenges, when I consider the outstanding faculty, staff and students of the University of Dallas, I have great confidence that, working together, we will overcome those challenges, and indeed, grow and thrive,” said Andrews. “Thinking of the men and women who have preceded me as Constantin dean, I'm humbled to continue their great work. I'm particularly grateful for the example and service of outgoing Dean Sally Hicks, with whom I've worked most closely these past two and a half years.”

Largely due to his successes in the classroom and forward-thinking teaching on high-performance computing, Andrews was awarded the SC12 HPC Educator Award, which provided him with a competitive grant to attend the International Conference for High-Performance Computing, Networking, Storage and Analysis.

Apart from his teaching experience, Andrews has consulted and worked with a number of businesses, companies and nonprofits, including Texas Instruments, the award-winning political consulting firm Nasica, and the global nonprofit CARE. Andrews has served on and helped advise more than a dozen university committees including the Faculty Senate (2007-present), the Joint Committee on Business Education (2008-present) and the 403b Review Committee (2013-present), which oversees the university’s employee retirement benefits.

The new interim associate dean, Burns, served as a congressional staffer for the U.S. Department of Health and Human Services in Washington, D.C., as a senior policy adviser while on leave for the 2019-20 academic year. Burns received his Doctor of Philosophy in political science at Boston College, where he also held a two-year teaching fellowship. His research in political philosophy focuses on the relationship between religion and citizenship, inquiring into the meaning and limits of religious freedom. He joined the UD Politics Department in fall 2012 as an assistant professor, and later completed a postdoctoral research fellowship at the University of Texas at Austin.

At the end of June, Sally Hicks, Ph.D., former interim dean of Constantin College, will take “a well-deserved sabbatical over the next academic year,” said Provost Jonathan J. Sanford.