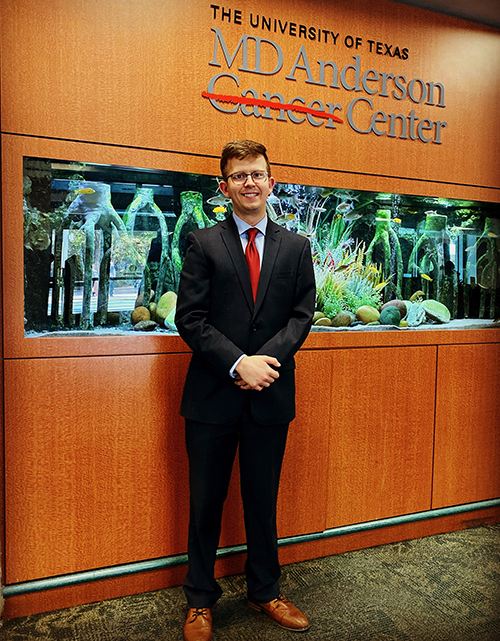 Shortly after arriving at UD, Jonathan Cunningham, BA ’17, mapped out his post-graduation plans: His first step was to enroll in physician’s assistant school at Baylor’s College of Medicine, a career trajectory to which he had aspired since his early childhood as a brain cancer survivor. Nowadays, Cunningham is dedicated to the same vocational pursuit of comfort and healing at MD Anderson in Houston, among the largest cancer treatment centers in the U.S., where he was once a chemotherapy patient himself.

After completing his MS at Baylor at the end of 2019, Cunningham began his career at MD Anderson. “At times, I questioned whether I would struggle having to confront my own medical history throughout my career,” says Cunningham, “or if I was pursuing the medical profession to selfishly prove that I had finally defeated cancer.”

“I have seen time and time again the benefits of studying the core liberal arts curriculum and having the opportunity to study in Rome,” explains Cunningham. “The depth and richness of the UD education is like no other.”

“The depth and richness of the UD education is like no other.... I was given the unique opportunity to learn the riches of the sciences, the humanities, and the continuous pursuit of truth, all of which come together in the field of medicine.”

Practicing in one of our country’s largest cities presents a range of Spanish-speaking patients with whom Cunningham can utilize his dual-language skill on a daily basis. “Having pursued a degree in Spanish at UD has allowed me to connect with more patients by not having to worry about a language barrier,” he continues. “The patients can feel more comfortable expressing themselves, can explain their health situation more accurately, and are able to understand their health in a deeper way.”

At UD, Cunningham adds, “I was given the unique opportunity to learn the riches of the sciences, the humanities, and the continuous pursuit of truth, all of which come together in the field of medicine.”

“As a medical provider,” says Cunningham, “I get the pleasure to walk with people in some of their most vulnerable and difficult situations. … I have found it extremely humbling to work with others who are going through tough medical diagnoses in their own respect, sharing with them and learning from them.”

Cunningham was ultimately attracted to UD for its combination of rigorous academics, a Catholic community and the liberal arts, in addition to the university’s 85% medical school acceptance rate for pre-med students. “The idea to become a physician’s assistant didn't really form until I was able to do some shadowing and talk with my professors and mentors at UD,” he continues.

"Medicine is a constantly developing field, in which one encounters the realities of the natural world and struggles with the truths of the human person.”

“I would encourage those considering the field of medicine to find an inspiration that draws them to the vocation, and come back to it through the struggles that you will undoubtedly encounter along your journey,” says Cunningham. “My time at UD, academical and personal, definitely helped lead me to where I am today.”

Dedicated to his “pursuit of personal encounters,” Cunningham adds, “Medicine is a constantly developing field, in which one encounters the realities of the natural world and struggles with the truths of the human person.”