A Field for the Future

In spite of their field, the soccer programs have still achieved success, with both men’s and women’s soccer boasting a number of All Conference selections, USCAA All Americans, USCAA Academic All Americans and All Region selections, among other awards. A new field, however, would almost certainly elevate UD’s level of play.

Think of a fall Friday night, a few years from now after enhancements have been made. Students short on cash and lacking cars will have another entertainment option: a soccer game, right here on campus. They’ll follow the lights and the cheers over from their residence halls, relishing crisp October evening air. They’ll move through the ticket booth, then buy hotdogs and Cokes and make their way over to friends already there, sitting in the amphitheater-style seating, rooting for the Crusaders. A tradition will take hold; a culture will evolve.

It won’t always be college games; sometimes it will be high-schoolers, their families in tow. “What a welcoming place!” they’ll remark, and begin to research the University of Dallas. A year or two later, they’ll return as full-fledged members of the UD community, immersed in the tradition and culture that began, for them, at a high school playoff game.

Sometimes it will be the big names in soccer, practicing on our level, regulation-size, well-lit field as they stop off in Dallas on their way to major international competitions. They’ll tell others. “Oh, the University of Dallas. It’s the best place. Look into it.”

You see, a new soccer field isn’t just about soccer. It’s about the community that takes root in a common cause, flourishes through common endeavors. It’s about creating a culture and perpetuating a tradition. A field is the first step. 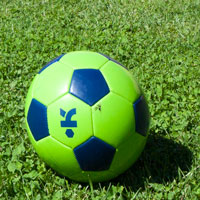 “ Having the team grounded me; I felt like I had all these sisters, and that helped me find a home at UD. ”- Sister Josephine Garrett, BA ’03, Former UD Soccer Player

To learn more about naming opportunities and other ways you can support our soccer enhancement project, contact: