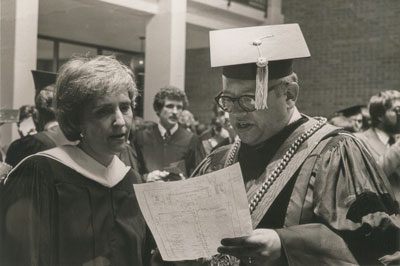 “This is that story, a celebratory history of the life we have had the privilege of living, of an institution whose founders and ideas inspired a small brave community of faculty and students in quite ordinary buildings on the barren hills of western Dallas County overlooking Dallas,”

wrote Sybil Novinski, most recently university historian, in the 2006 history of the university she had compiled at the request of then-President Msgr. Milam Joseph.

Sybil herself came to the University of Dallas with her husband, Lyle, just four years after its opening, in the fall of 1960. She and Lyle were newly married, and she had graduated from Marquette University in Milwaukee with a bachelor’s degree in English and a good number of science credits. She had done some marketing research for Gillette and some graduate work in educational psychology at the University of Chicago.

Within a year of her arrival at UD, Sybil was asked by the Art Department’s first chair, Father Philip Szeitz, O.Cist., to edit the department newsletter. Shortly thereafter, the newly appointed then-President Donald Cowan requested that she take charge of Information Services, followed by Admissions and Student Programs; she subsequently served as registrar, associate academic dean, associate provost and finally university historian.

“It was, through the years, a hands-on education in university administration,” she said.

Along the way, Sybil completed an M.A. in English at Southern Methodist University and the majority of the coursework for a doctorate in literature here at UD.

“But five extraordinary children and the university kept drawing my attention,” she said.

Much more than simply an historian, Sybil has served as a guardian of memory, culture and tradition here at the University of Dallas. As she transitions to a well-deserved retirement, her wisdom, insights and stories will be dearly missed.

Make a gift to the Archives in honor of Sybil Novinski 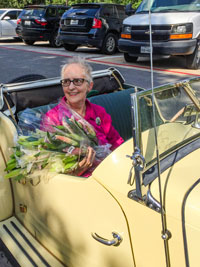