When I first met Sybil, I was a high school senior from Irving.

A friend and I had wandered on our bikes out Northgate (which had just recently been built), and happened upon the UD campus — not only desolate and ugly, but deserted, because students were on spring break. But when I spoke with some students who were hanging around, they called Sybil at home and asked her to come to talk with me. I had already committed myself to another university, but within two minutes of speaking with Sybil, I knew that UD was my home. And we both knew it. We looked into each others' eyes and knew it. Why this certainty? Because a young person — and an older one, for that matter — needs the sense that someone ‘knows’ them, someone sees who they distinctly are, and respects it. That, for me, has always been Sybil's great gift — she calmly, quietly, sees the whole person and treats that person with the most natural and simple dignity. For decades she spoke face to face with individual students, who felt, as I did, that they were ‘at home’ with her, and in good hands, so that she could encourage them and tease them in the right direction, and intervene for them, too, if necessary. Then later finding a home as a teacher at UD, I continued to count on Sybil as a friend and counselor, because she signaled to me and affirmed the ground of our mutual faith in what we were doing. She always found a way to make things happen, with the least possible fuss and complication, and with her eyes on our common aims. Sybil for me has embodied our common faith and our common labor, as much as anyone I have ever known at UD. She will always be a presence here, having become inextricable from the genius loci of the place.

Out of so many virtues and talents that Sybil Novinski has graced the world with, I would like to focus on two of them.

First, through all her years at UD she has been a splendid reader of souls, seeing what students lacked and what they needed and then guiding them to the right classes, the engaging teachers, and the important activities to open their minds and hearts to the world. She saved many a student! Second, she is a muse and protector of the arts, doing everything from encouraging young artists, to helping her husband, to selling tickets for Irving's Lyric Stage; no matter the art, she is always there to work for, promote, encourage and celebrate it. Sybil was so important to both of my parents as she worked energetically and tirelessly as university registrar and in other crucial posts both formal and informal. Don often said that Sybil was the single person who held the university together (though the way he said it, he may have meant ‘the universe’). And a few years ago, when Sybil was critically ill, Louise made it her business to get to the hospital and sit by her bed. She leaned in close to Sybil and told her as loudly as she could, ‘Sybil, you cannot die. The university needs you too much.’ But it was also my mother who needed her, because as long as Sybil was here at UD, Louise knew it was in good hands.

My first impression of Sybil Novinski was during orientation freshman year.

In those days, faculty hosted parties at their houses, and I skipped the one for science majors and went to her house with my new friends who were art majors. She and Lyle hosted, and still host, student, faculty, alumni and donor parties with an extraordinary combination of grace, culture and warmth. She has been a supreme example of Christ as shepherd, caring for all of us lost sheep. When I spoke of her with good friends recently, one immediately said that her monthly meetings with Sybil literally saved her life and kept her from killing herself out of stress and anxiety. The next said that Sybil not only saved her life, she showed her how to make her life. She has indeed been our Hestia, the keeper of the flame, preserving, maintaining and cultivating the spirit that wanders these hills.

I actually felt like I belonged at UD when I was with her in the Archives.

There I was free to admire the beauty of the past, purposed with bringing the memory of those who truly mattered into my own consciousness. What I learned was gratitude, that the world did not begin with me and that I need to thank daily those who have made my life a reality. The world makes sense in her presence because she brings to it joy, thought and order.

— Parker Novey
BA’19, who was one of Novinski’s student workers 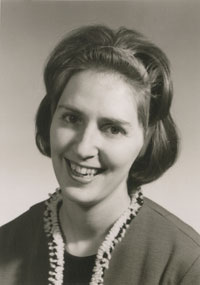 Make a gift to the Archives in honor of Sybil Novinski