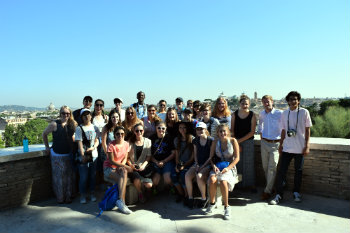 After arriving on campus for orientation and a tour of campus, students took a trip to neighboring Castel Gandolfo for their first gelato! Shakespeare’s life and career were introduced later in the evening which led into classes on Julius Caesar the following day. The group enjoyed a walking tour from the Aventine Hill to the Theatre of Marcellus and later had their first Drama workshop.

In the following days, the Forum and Colosseum were explored as well as the Pantheon and Piazza Navona. All the students are having a great time and making friends. Class time has been great too. The group is preparing for their upcoming Shakespearean journey by studying the Merchant of Venice.

Rome and the Catholic Church 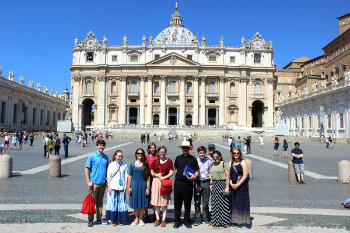 Rome and the Catholic Church began its journey at St. Peter's with a Mass celebrated by Fr. Oberle at the altar of Pope John XXIII. Two Salesian nuns from Zambia joined the group and thanked Fr. Oberle for the first Mass in English they had had since coming to Rome. The group toured the basilica and had a long walk past Castel St. Angelo, through Piazza Navona where they stopped for cappuccino, granite and gelato.

In the following days they visited both St. Paul's Outside the Walls (where Father celebrated Mass), St. Paul's martyrdom site at Tre Fontane, St. Maria Maggiore and St. Giovanni Laterano. 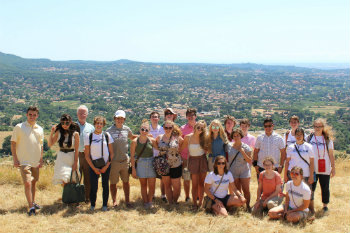 Latin in Rome began with a wonderful afternoon trip to Tusculum and Castel Gandolfo – the neighboring areas of Due Santi. Keeping the Latin alive, the following days included a walking tour from the Aventine to Teatro Marcello, a visit to Cerveteri to see the Etruscan necropolis, a trip to Tarquinia to see the Etruscan museum, and a relaxing day at the beach of Santa Severa, which sits next to a beautiful medieval castle, where the group swam, had lunch and sang boisterous pop songs.

The group continued their Latin journey with visits to the Roman Forum, Palatine Hill, Monte Cavo and Ostia Antica. After a tour through Trajan's Market, and the Musei Capitolini, Latinists continued their studies back on campus and began to prepare for their trip to Naples!