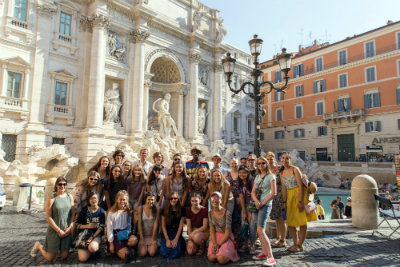 An enriching journey through Italy from Shakespeare’s perspective has included visits to the amazing Trevi fountain, the Spanish Steps, and the Angelus at St. Peter's in the square!  The Scavi tours were enjoyed by all.

The picturesque settings of Padua and Venice beautifully unveiled the inspiration behind many of Shakespeare’s plays also inspiring the students in their readings and performances. The students seemed to love shopping, seeing the fish market in Venice, the Teatro Olympico in Vicenza, and swing dancing in a piazza in Padua one night.

Shakespeare in Italy came alive for the students through their performances of sonnets and scenes from his infamous plays in the settings and culture that so richly influenced him. Everyone agreed that these readings were some of the best from the years of this program!

The students will spend their final day in Rome after the final exam, and surely return with an enlightened perspective of Shakespeare, and all that is Italy. 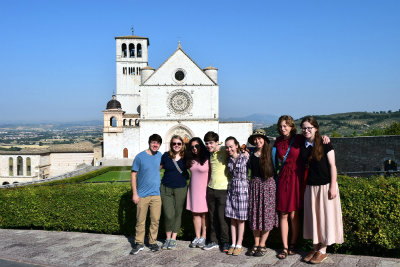 The students enjoyed their visit to the source of the Benedictine Order at the historic abbey at beautiful Montecassino. The next stop was Ravenna, known for its well-preserved late Roman and Byzantine architecture, and also where the group had the meal of the trip, two and a half hours of great food!

Assisi is always a highlight, and although hot this time of year, is always gorgeous. The students enjoyed visiting all of the sites associated with Francis and Clare, and each day had an hour-long class with Father Oberle on such subjects as Marian dogmas and Monks vs. Friars. Everyone enjoyed exploring Assisi in the evening, and are developing quite the gelato obsession on this trip!

Another highlight was a visit to the papal palace at Castel Gandolfo with Father Brown to see the papal telescopes. Father spoke about his career as a Jesuit papal astronomer and how he handles questions of faith and science that often pop up at scientific conferences, weaving autobiography, philosophy, and theology together to make a strong case for the coherence of faith and reason. Students loved seeing the telescopes in the dome above the papal palace, and there was even an exhibit of Popemobiles in the courtyard.

The next day started at the Piazza Farnese and S. Girolamo, reflecting on Renaissance design and St. Filippo Neri. After a walk through Campo dei Fiori and thence on to Piazza Navona, the group visited the Caravaggios at St. Luigi dei Francesi and St. Monica at the church of St. Agostino. A refreshing break at Della Palma, with 150 gelato flavors offered, helped make everyone's dreams come true. Then a long walk to the Vatican Museums, an extended tour inside, and a bit of a break before venturing down into the Scavi. The final excursion on the program will be an evening walkabout in Rome, filling in the final missing piece by experiencing the awe-inspiring Pantheon. 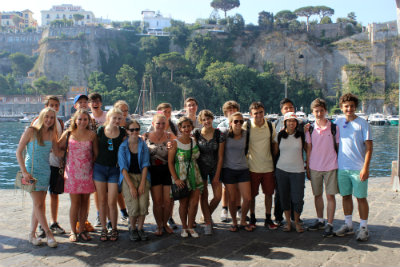 As our Latin group departed for Naples, they first stopped in Herculaneum to explore the Scavi - a replacement for the usual hike up Mount Vesuvius, which is currently covered in smoke from a recent fire. After a nice meal at a local pizzeria, they continued on to Sorrento, and after dinner, read some Tacitus as a group, and then later explored the main piazza.

The group took a ferry to picturesque Capri and a beautiful boat ride around the island. They explored the main square and some ventured to find the villa of Tiberius. After returning to the hotel, they read some Tacitus on the terrace and strolled around Sorrento for a while. The students look forward to their exploration of Pompeii where they will read passages from Book VI of the Aeneid, in preparation for their upcoming pilgrimage to the cave of the Sybil.

The Amphitheatre in Pozzuoli was visited, which is a smaller version of the Colosseum in Rome, designed and built by the same architect, but with easier access to the ground and underground areas. A visit to Cumae, and the Cave of the Sybil followed and outside the temple of Apollo, the students read in small groups some of the Aeneid.

A refreshing trip to the beach in Minturno was followed by a visit to the Cassino War Cemetery in remembrance of the fallen, and then to Monte Cassino. Before heading back to campus, the group visited Arpino, built roughly around 900 BC and also Cicero's birthplace.

Before our Latinists return, they will also experience the Palazzo Massimo, visit excavations in Norba, and take a final walk in Rome from the Ara Pacis to the Pantheon, hopefully reflecting on a richer and deeper understanding of Latin, and its contribution to civilization.