Our Latin in Rome group arrived at our beautiful Due Santi campus on July 10th and settled in to their home for the next three weeks. They hit the ground running with a trip to Tusculum, the birthplace of Cicero and Castel Gandolfo, the summer residence for the Pope. After taking in the stunning view of Lake Albano, they explored the small town while enjoying wonderful gelato. They returned to Due Santi to have their first class, eat dinner and then get some sleep after a long travel day. 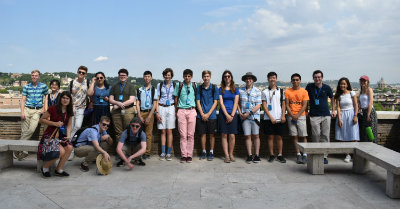 The group took their first foray into Rome on July 11th. Beginning at the Arch of Constantine, Dr. Sweet explained the history, creation, and reason behind the arch’s construction followed by a stop outside of the Colosseum where another history lesson was held on the construction of this Flavian Amphitheatre, and then a walking tour of San Clemente. Then it was back to campus to eat lunch and have a class, then free time to use the pool, rest, and/or prepare for the evening session, where Dr. Sweet guided the students in translating Suetonius’ description of the murder of Caesar. 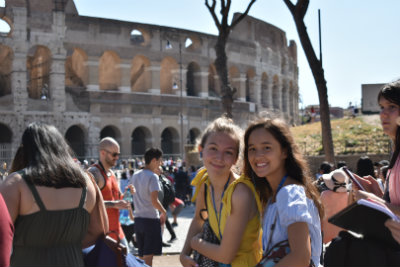 July 12th was a busy walking tour! After a history lesson at Circus Maximus, the students walked up the Aventine Hill to see Santa Sabina and read some Latin from Livy describing Romulus and Remus and the importance of the Aventine to their founding of Rome. The students then walked down the Aventine and into the Forum Boarium, with its two temples - the Greek temple of Hercules, and the Roman temple of Portunus. From these two beautiful temples the students went down to look at the Tiber River, where Dr. Sweet explained the significance of the river to Rome, the broken bridge, and Tiber Island. The last stop of the day was the church San Nicolo in Carcere. Returning to campus for lunch after this eventful day, the students took a verb synopsis quiz, and then had free time until dinner. After dinner, students were sorted into their small groups after we finished translating The Murder of Caesar together as a group. 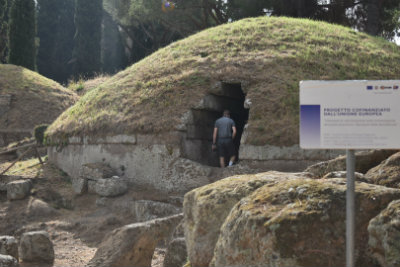 Over the next few days, the group had an excursion to Cerveteri, exploring an Etruscan necropolis, Tarquinia, with a museum of wall paintings from Cerveteri and a collection of Greek pottery, and Santa Severa, where the students enjoyed a swim at the beach.

The Forum Romanum, the center of business and of day-to-day life for the Romans, was visited by the students as well. A visit to the Palatine Hill was also included, which overlooks the Forum, and is where the emperors built their palaces.

On July 16th the group hiked a steep part of Monte Cavo, where they reached the Roman road which leads to a nice lookout point. After hiking back down, they then visited the ancient port city of Ostia Antica, which was once a port town situated at the mouth of the Tiber. Ostia was integral to Rome’s food supply, and initially housed a Roman military camp. Later on in the empire, it became more of a resort town for the Roman elite. Dr. Sweet gave a couple of short talks about Ostia and its history, then the students were given free time to explore the city.