Latin in Rome got up early today to drive down south to Naples. They began by climbing Mount Vesuvius. After ascending and descending the mountain, the group headed further south to visit Oplontis, a villa belonging to Poppaea, second wife of the emperor Nero. After exploring Oplontis, they made their way to their hotel in Sorrento. After checking in and having dinner in the hotel, the students read some Tacitus with Dr. Sweet on the hotel’s rooftop terrace and then were given a short amount of time to wander around the small downtown of Sorrento before bed. 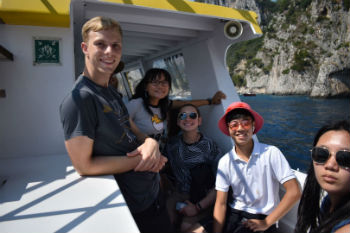 The group visited the island of Capri on July 19, former private home of the emperors, and current home to the ruins of Tiberius’ villa. The group enjoyed a boat tour of the island and even got a look at the cliff Tiberius used to push astrologers off when they displeased him. After the tour, students were given free time to explore the upper island at their leisure and grab lunch on their own. Returning to Sorrento, students prepared for the evening’s tutorial, had a nice meal and got to spend one last night on the town before departing for Pompeii in the morning.

The group left Sorrento and headed to Pompeii on July 20 where they spent nearly two hours exploring the ancient ruins. From Pompeii the group headed to Pozzuoli, where they stayed the night. They had lunch in the hotel, followed by free time and use of the pool. At 5, Dr. Sweet and Dr. Grewal led class on scansion and then the group headed off to dinner. The evening wrapped with a tutorial and reading of Book 6 of the Aeneid. 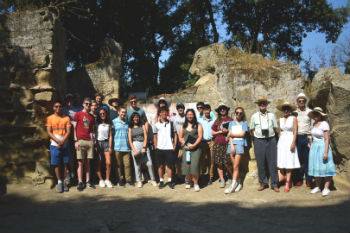 The group checked out of the program hotel in Pozzuoli the morning of the 21 and began their journey to Sora. They first stopped to visit an amphitheatre in Pozzuoli and were able to go beneath the floor of the amphitheatre to see where the wild animals were kept, and how the wooden platforms used as elevators would have functioned. From Pozzuoli the group drove to Cumae to visit the Cave of the Sybil and the temple of Apollo built above it. The next stop was lunch at the beach in Minturno. After lunch the group continued to Montecassino Abbey and paid a visit to the British Cemetery. The students ended their evening with mass, dinner and a reading of Book 6 of the Aeneid before settling into their rooms in the hotel in Sora for the night.

The group left Sora on the 22nd to visit Arpino. They first stopped at the Tower of Cicero at Isola dei Liri, Dr. Sweet gave a short history of the Roman historian, Tacitus and sight-read a little bit of the Aeneid. Afterward students went to Arpino, hometown of Cicero, Marius, and Agrippa, where students were given time to wander on their own, grab some lunch and gelato. From Arpino, the group returned to campus! Students had plenty of time to unpack and relax and prepare for their evening's tutorial. After dinner, Dr. Sweet led a class to review subjunctives in preparation for tomorrow's quiz and students split into groups to begin translating Tacitus.