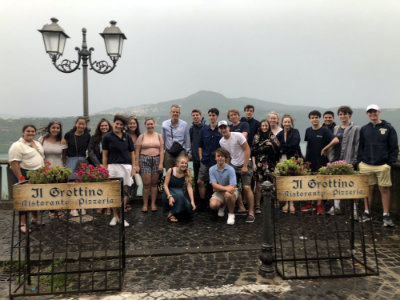 After arriving safely in Italy on July 10, Shakespeare in Italy students settled in at the beautiful Due Santi campus and worked hard to stay awake to get on schedule! In the afternoon, the professors took the group to nearby Castel Gandolfo, cite of the Pope's summer house, the city founded by Aeneas' son (possibly), and a strategic point during WWII (among other things). There students had their first literal taste of Italy--gelato!

The next day Shakespeare in Italy spent the day on campus, recovering from jet lag but also diving right into studies with classes on Roman history and Julius Caesar I-III, as well as small groups working on close reading skills and reading aloud. We also took advantage of the beautiful cool weather with a class outside in the Forno. Everyone is looking forward to our first excursion into the city tomorrow! 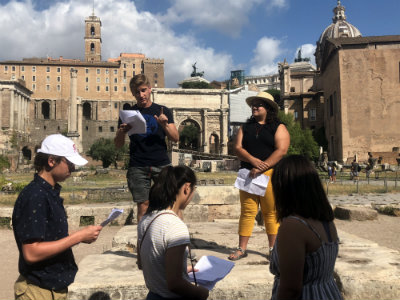 July 12 was Shakespeare in Italy's first day in Rome. We began our trek at the peaceful Aventine Hill and church of Santa Sabina and then went down into the bustling city, visiting the Circus Maximus, Forum Boarium, the Theater of Pompey (now a cat sanctuary), and the Campo dei Fiori, an open-air market where just about everyone bought delicious fresh fruit and juice! Students kept admirable pace with Dr. Moran's speedy walking! They spent this afternoon and evening studying act III of Julius Caesar and having individual meetings with professors about their papers.

Shakespeare in Italy visited the Forum and Colosseum on July 13. In spite of the heat, they not only toured the sites but also performed Brutus' and Antony's speeches from Julius Caesar in the very spot where they would actually have taken place. Several tourists stopped to watch, very impressed. We made it to our bus pick-up in time for a gelato break and (for a few energetic people) a run around the Circus Maximus. After more discussion of Julius Caesar this evening, students had a blast but also made good acting progress doing drama and improv exercises with Prof. Novinski.

The group spent July 14 on campus, had an American(ish) brunch, finished up discussion of Julius Caesar, and ended the day with a class on Roman architecture from Prof. Novinski. 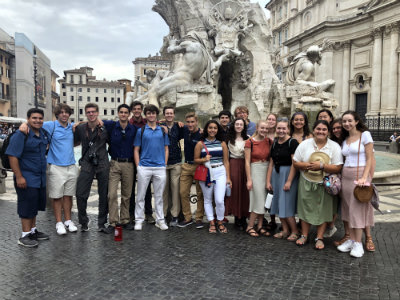 Students spent a delightful morning in the heart of Rome on July 15. The highlights of which were the Piazza Navona and its Fountain of the Four Rivers, the Church of the Gesu, and the Pantheon. They also viewed several stupendous Caravaggio paintings in S. Luigi. And of course, there was also gelato. In the afternoon they had their first class diving into The Merchant of Venice. They finished off the evening with a lecture on Argumentation from Dr. Davis in preparation for their final papers.

On July 16 Shakespeare in Italy had a "Life in Italy" day: we visited the nearby town of Albano, visiting a church there and the ruins of an old military camp, and then spent a few hours at the beach at Lake Albano. The kids had an absolute blast playing in the water, dancing to oldies, and just relaxing on the beach, which is basically the inside of a volcano. This afternoon we had our second class on Merchant of Venice and the kids are currently working on a close reading assignment. They're getting excited for their upcoming trip to Venice and Padua!