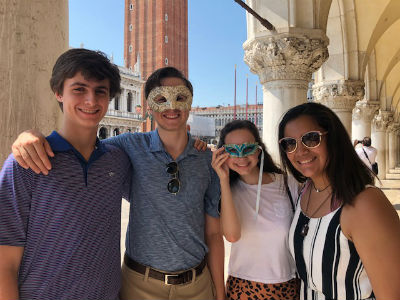 Shakespeare in Italy had a pleasant train journey to Padua on Thursday, July 18 arriving safely to their hotel in the early afternoon. After getting settled in, they went out and got acquainted with the beautiful University town. Dr. Moran and Dr. Davis gave introductions to the city and the university and the students performed a scene from Taming of the Shrew in which the characters arrive in Padova. The group then headed to the Scrovegni chapel where students were awed by Giotto’s marvellous frescos.

After dinner and an early night, the program was up bright and early the next morning to take the train into Venice. After approaching the city by boat just as the ancient traders and ambassadors to Venice did, the group visited the San Marco Basilica with its beautiful mosaics before following Dr. Moran through the twists and turns of Venetian alleyways to visit a few other churches and 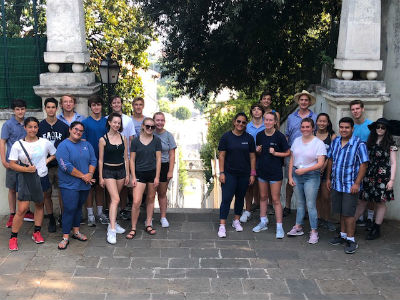 statues. In the afternoon, students took their pick of a visit to the Guggenheim Modern Art Museum, the Accademia Venetian Art Museum, or the Doge’s Palace, which included not only great art and fascinating history but weapons and dungeons as well. After experiencing a Venetian vaporetto rush hour, we made it safely back to Padova, and students had the chance after dinner to enjoy an evening in Padova’s lovely piazzas. Absurd amounts of gelato were consumed and the students finished out the night with a little dancing in the streets.

On July 20, Shakespeare in Italy students visited the “Green World” of Vicenza, complete with a hike to the lovely countryside Villa Rotunda. After performing a scene from Taming of the Shrew and wandering the grounds of the Villa, students visited the Teatro Olimpico, the first indoor theatre in Italy, and enjoyed the town of Vicenza before heading back to Padua for a bit of shopping and then anticipatory mass at S. Antonio. After dinner, students had the chance to enjoy a vibrant Saturday evening in Padova. Both gelato and dancing were again involved in abundance. 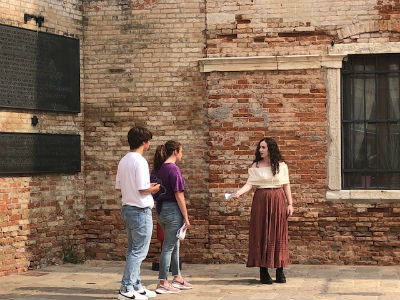 The last day in Venice was a more leisurely day for the group but they still did a lot of walking and exploration of the city! They began the morning with a visit to the Venetian Ghetto where students performed some important scenes from The Merchant of Venice. They also learned about Roman Comedy from Profs Moran and Novinski and acted out some of the elements of Roman comedy much to everyone’s entertainment. After lunch and some time for shopping on the Rialto, students visited the Frari Basilica with its collection of glorious art.

The journey back to campus for the Shakespeare group was an eventful one. Due to a train cancellation the group had to spend many unexpected hours in the train station waiting to get rebooked. The students were troopers though as they snacked and played games in the cafe until 3:00 when, due to the efforts and savvy of Drs. Davis, Moran, and Prof. Novinski, they finally got on the train back to Rome.