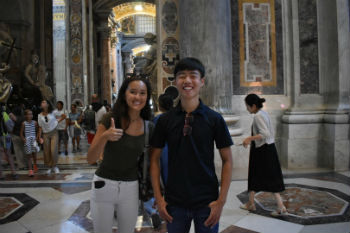 The Latin in Rome group went on a self-guided tour through St. Peter’s Basilica on July 24. Dr. Sweet gave everyone a map with key points of interest for students to guide themselves through as their whims and interests dictated. After St. Peter’s, the students went on a tour of medieval and Renaissance Rome. They visited several churches that had paintings or sculptures of the various Masters. They saw a nice fresco from Raphael depicting four sibyls, as well as a Caravaggio and experienced Piazza Navona and its Bernini fountain. The group had lunch in Rome, and then returned to campus. Dr. Grewal gave a lesson on gerunds and gerundives.

The group visited the Palazzo Massimo and Museo Epigrafico on July 25. The Palazzo Massimo has many fine sculptures from across the time periods of Rome, including, but not limited to, busts of emperors and their wives and family members, coins from before the Republic to the early 20th century, and even a mummy! The Museo Epigrafico houses many inscriptions, art, and instruments from the various time periods of Rome. In each museum, Dr. Sweet took students to a couple of key exhibits and then let them go to wander the floors at their leisure. 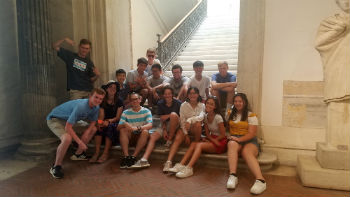 On the 26th the group visited the remains of the ancient city of Norba - a city established long before the Republic and destroyed by Sulla’s troops during the civil wars. After a good time exploring, the group then went to the nearby town of Sermoneta to enjoy lunch. After their return, the students took a pre-final quiz and Dr. Grewal gave a talk on the history of the Capitoline.

Latin in Rome’s last excursion into Rome took them to Trajan’s Market and the Capitoline Museums. Trajan’s Market was exactly as it sounds - a structure with various stalls for various sellers to hawk their wares. Possibly it is the first shopping mall. The Capitoline Museums takes up three buildings and houses the various pieces of art found around the Capitoline hill, including the Roman Forum. Part of the museum spans along the tabularia - where the Romans kept their records - and looks out on the Forum. After lunch in the Jewish Quarter, the group headed back to campus where students had time to prepare for the evening’s tutorial. After dinner, the students split for the last time into their small groups for the final tutorial of the program.

Sunday was the final campus day for the Latin in Rome program. Mass was available for those interested, followed by brunch. No wake up calls or demands today. Students were encouraged to review in preparation for their final. The evening finished with a farewell forno dinner with the campus staff. Tomorrow is our final day. Students will take their final before we head back into Rome for one last time.