In Rome, the air is beginning to cool and the tourists are dispersing. Students are beginning to earn their name as Fall Romers. They have successfully navigated two independent travel weekends, visiting cities like Vienna, Milan, Cinque Terre, Barcelona, and more. They have begun the serious academic work of the semester, having already turned in a paper and completed two exams. They delight in gathering as a group, either to read and perform their Lit Trad III works, to play music and sing together, or even to have impromptu dance parties. The Fall Romers have been exploring the neighborhood around the Due Santi Campus and making the most of their leisure time. 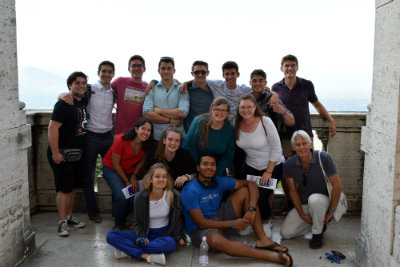 Last weekend, the Rome Program took its first group trip to Southern Italy, encountering for the first time what Dr. Hatlie calls 'educational travel'. The students first visited Monte Cassino, the abbey founded by St. Benedict of Nursia. At Monte Cassino, Ben Gibbs, the Director of Student Affairs, outlined the turbulent history of the abbey, the destruction that was inflicted, especially during WWII, and the resilience of the monks who rebuilt the abbey after each catastrophe. Dr. Ron Rombs explained the history of monks and their vocation, first as hermits in the desert, and the later development of communities of monks, like St. Benedict's. Dr. Peter Hatlie sketched the life of St. Benedict and his sister, St. Scholastica, and their impact on Europe as a center for the preservation of Western culture. Lastly, Dr. Elizabeth Robinson led the students through the abbey, teaching them to recognize the elements of architecture they have studied in the classroom, from the cloisters outside to the dazzling frescos within the cathedral. 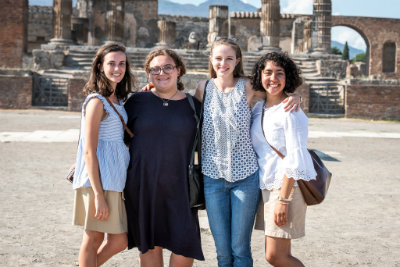 After Monte Cassino, the students visited Pompeii, the city below Mt. Vesuvius. Within the site, Dr. Hatlie introduced the students to both the drama and the tragedy of Pompeii. During the volcanic eruption of Mt. Vesuvius in 79 AD, the inhabitants of the city died and the city was covered and preserved by the ash which killed them. The city is so well preserved that the students are able to walk through the town, enter the bathhouses, the homes, the theaters, the restaurants, and the public spaces that remain almost fully intact.

The second day of the Campania trip, the students took to the sea! They began the day boarding a boat, which would take them to two beautiful towns on the southern coast of Italy, Amalfi and Positano. In Amalfi, they visited the church of St. Andrew, which holds the remains of St. Andrew brought there during the fourth crusade. Many of the students tried the lemon dishes for which Amalfi is famous and purchased beautiful painted ceramics. In Positano, the students hit the beach to swim in the clear, blue water of the Mediterranean. Finally, the happy, but tired students boarded the boat to return to the hotel. 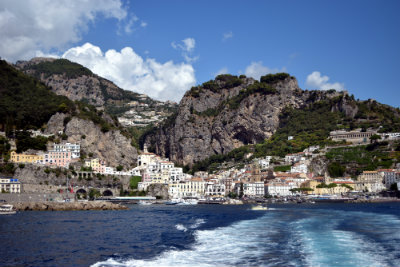 The last morning in Campania brought the students to the site of Paestum, where three of the most well-preserved Greek temples stand intact. Again, the students were guided through the site by their professors. Dr. Hatlie gave the history of the colonies, called Magna Graecia. Dr. Crider introduced lyric poetry as a mode of worship and the nature of the deities being worshipped. Dr. Nolan illustrated the Greek ideas of the philosophers of the colonies who were the first metaphysicians. Dr. Robinson described the architectural innovations which were first used in Paestum and then imitated in the construction of the Parthenon. The students were able to explore this marvelous site on their own and visit the museum which held many of the archeological finds from the site. The schedule for the trip was packed, but throughout it, the students were full of energy and laughter.

Even after the Campania trip, the students had an exciting week. The grapes in the vineyard were ready to be harvested for wine, so most of the students volunteered to help bring in the harvest. The harvest of the grapes, or Vendemmia as Italians say, was so much fun. The students worked collecting the grapes, but sang and joked throughout the morning. Many of them took pictures of themselves clipping the grapes, eating giant bunches, or even just holding them up to the camera with big smiles.

Now, the students are studying for another test, looking forward to the Greece trip and planning their travels for the Fall break.