The Spring 2017 Romers woke bright and early on Friday March 3rd to board the buses for the start of the Greece trip. Along with their professors Dr. Hatlie (Western Civilization), Dr. Robinson (Art & Architecture), and Dr. Davis (Literature) and assisting chaplain Father John Bayer, as well as the Student Life staff, the students spent ten days exploring Greece, immersing themselves in its rich history and beautiful architecture, pondering its great philosophies and performing scenes from the great Greek tragedies. This ten day trip is an amazing opportunity that allows UD students to expand their understanding of the ancient Greek culture and its significance within UD’s core curriculum. 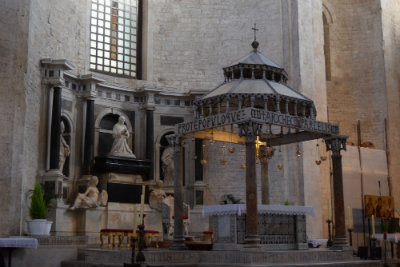 March 3rd- While making their way to the Italian port of Bari, the students stopped at the Basilica of St. Nicholas where St. Nicholas’ relics are housed. After this brief visit they set sail for Greece on board the Superfast II.

March 4th- The group arrived in Greece at the port of Patras and began a long drive to the city of Delphi. A lunch stop at Clovino Beach gave students the opportunity to meander along the Mediterranean shore. The day concluded with the group’s arrival in Delphi, followed by both Mass and dinner in a restaurant (due to the scarcity of Catholic churches in Greece, the group celebrated Mass in restaurants, conference rooms of hotels and other strange places!).

March 5th- The morning was packed with a visit to the archaeological site and museum of Delphi where professors lectured on the city’s significance. After lunch, students had the option to explore the city or climb Mount Parnassus. The day concluded with Sunday mass in the restaurant and a delicious dinner of Greek delicacies. 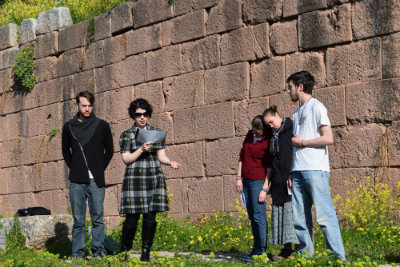 March 6th - The class departed for Athens with a stop at the Monastery of Hosios Loukas, famous for its Byzantine art and architecture, unique hand-painted icons, and delicious local honey. Dr. Hatlie gave an introduction to “Holy Luke” (a Saint in the Orthodox tradition) and the basic architecture of the churches, Fr. John spoke on Orthodoxy and Catholicism, and tours of the church were lead by Dr. Hatlie and Resident Coordinators Ivanna Bond and David Flynn. Later in the afternoon the group arrived in Athens and quickly headed to the Pnyx, Socrates’ Prison, and the Areopagus where they were introduced to the history of the ancient city and enjoyed a student performance from The Eumenides. 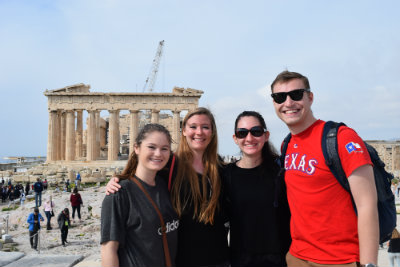 March 7th- The day began with visits to the Agora, Agora Museum, and the Acropolis. The students were then free for the rest of the day to explore the city, visit the Acropolis Museum, or take a hike to the top of Mount Lykabettos.

March 8th- The morning started with a visit to the National Archaeological Museum after which the class departed from Athens. The next stop was the ancient site of Corinth, where St. Paul once lived. There was a bit of rain but that didn’t stop students from enjoying lectures from Fr. John and Dr. Robinson. After a lunch break on the canal, the class arrived in the seaside town of Nafplion.

March 9th- The group took a morning trip to the ancient city of Mycenae, featuring the Lion’s Gate and Tholos Tombs. Many students opted to perform a capella songs in the Tomb of Clytemnestra, which provides excellent acoustics. Upon returning to Nafplion the class had free time to explore the town and nearby beaches, followed by a Greek-style pizza dinner. 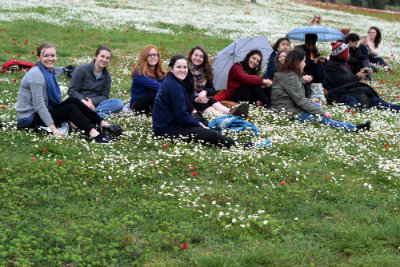 March 10th- After a short visit to the Palamidi Fortress overlooking Nafplion, the class headed off to the Archaeological Site of Epidaurus, where students had the opportunity to test out the acoustics in the ancient theatre. Finally, the group made its way to the final destination of the trip: Olympia. After a long scenic drive through Grecian mountains, the group settled into the hotel for dinner followed by a special treat of Greek dancing.

March 11th- The group toured the Archaeological museum and site of Olympia where the ancient Olympic Games were held. The visit concluded with students running a foot race in the ancient stadium. Marcos Lipic won the men’s race and Helen Trumble was triumphant in women’s race! After lunch the class then made their way by bus to the port city of Patras with a stop at the Church of Saint Andrew, after which they boarded the Superfast II bound for Italy.

March 12th- The Greece trip ended with an arrival in Bari and a long journey back to Rome. Back on campus Father John said Sunday mass, and students were finally able to rest after ten days packed with exciting travels.