When the students arrived in Rome, they were greeted with drizzly rain and grey skies. As the buses approached campus, the clouds parted and shone on their new home. As they got off the bus and saw the vineyard and villa for the first time, many students exclaimed, “It is so beautiful!”

Their excitement and enthusiasm carried them through the first days, despite a busy schedule and jet lag. The first day, students unpacked, settled into their rooms, and explored the Due Santi campus. The faculty and staff met the students and celebrated their arrival with an opening mass and convocation. The Director of Student Affairs, Benjamin Gibbs, encouraged them to be present during their semester and to communicate often with their loved ones. Msgr. Fucinaro, the Rome Chaplain, urged students to look to Rome for inspiration, both spiritually and intellectually. The VP, Dean and Director of the Rome Program, Dr. Peter Hatlie, introduced the character of the semester as both precious and demanding.

The following day, the students explored both St Peter’s Basilica, celebrating Sunday mass there, and the city of Rome, walking with faculty members as guides. Many students began their semester long romance with gelato and espresso, while learning how to navigate the Eternal City. Later that evening, the Spring 2019 class celebrated their first week Italian style, with a wine tasting. Msgr Fucinaro, a wine aficionado, chose several delightful wines for the event and taught the students to appreciate and recognize qualities of truly wonderful wine.

The students have now adjusted to their weekly schedule of classes, trips into Rome, and cappuccino breaks! The students have visited cities all over Europe during their first long travel weekend, such as Prague, London, Amsterdam, Budapest, Cologne, and many more. They have already turned in their first Literary Tradition III essay and are now preparing for their first Western Civilization I test.

On Feb 6th, students were introduced to Ancient Rome through a full day of visiting both the Roman Forum and the Colosseum. Four courageous students stood before the tomb of Julius Caesar and performed soliloquys from Shakespeare’s Julius Caesar to much acclaim, both from their fellow students and from a good number of bystanders who stopped to watch.

After a busy couple of weeks, the students are now preparing for their first class trip to the beautiful region of Umbria. They will visit Perugia, known for beautiful architecture and delicious chocolate, Assisi, the home of St Francis and St Claire, and Orvieto, a stunning medieval town with a unique and spectacular cathedral. 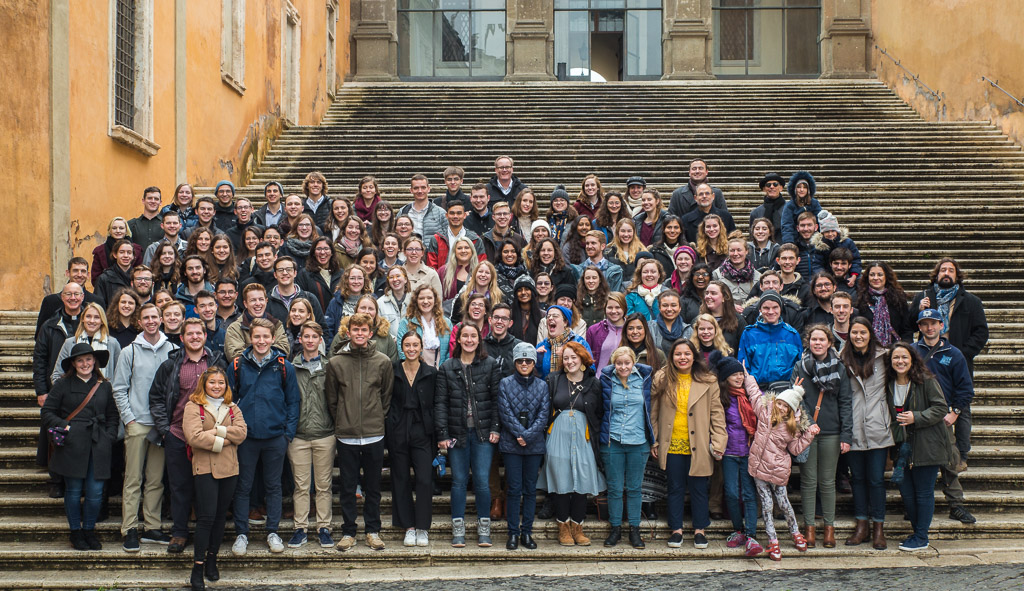