The Our Lady of Guadalupe Shrine: A Project 2 Decades in the Making

The Our Lady of Guadalupe Shrine: A Project 2 Decades in the Making 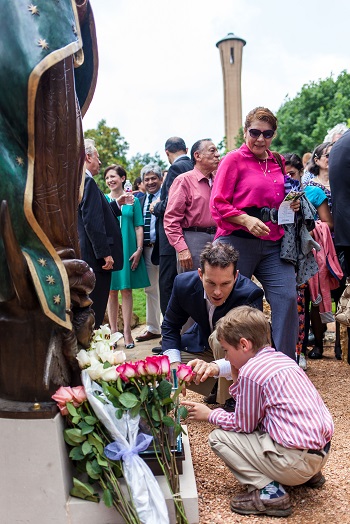 Following is the first in a multi-part series of stories on UD's efforts to build an on-campus shrine to Our Lady of Guadalupe, Patroness of the Americas. To support this project or for more information, contact Development Officer Jennifer Bowring at jbowring@udallas.edu.

The quest to bring a shrine to the Blessed Virgin Mary to UD is not a new endeavor. Instead, the proposed shrine to Our Lady of Guadalupe is an effort set in motion by a gift from the Class of 1997. That gift, the Mary of the Annunciation statue was sculpted by art majors Andrew Decaen, BA '97, and Eric Winogradoff, BA '97, and currently sits just outside the Church of the Incarnation on a spot that was intended to be temporary until a more fitting permanent home could be built.

And that is where the statue, now resting under a canopy of mesquite trees surrounded by a well-kept bed of pink and white, has remained for years, admired by many a passer-by.

Now, the effort has been given new life, thanks to Andy Farley, BA '99, who is a classmate of Decaen and Winogradoff. In 2010, Farley found a supporter for the project in newly-arrived President Thomas W. Keefe. When consulted about the project, Bishop Kevin Farrell of the Catholic Diocese of Dallas, requested that the shrine be dedicated to Our Lady of Guadalupe instead. Our Lady of Guadalupe is the patroness of the Americas, making the request even more fitting in the wake of the election of the first pope from the Americas, Pope Francis.

"That immediately made sense to me, even though I didn't really know the story at the time," said Farley.

The more Farley learned, the more he loved the story of Our Lady of Guadalupe appearing as a native mestiza woman to St. Juan Diego on the Hill of Tepeyac.

Over the last few years three alumni Farley, Laura Felis Quinn, BA '86, and Joseph Cyr, Jr., BA '97 MBA '99 have become intimately involved with the shrine project with help from Zeke Balan, BA '99, Joe Christensen, MA '08, and Matthew Bellet, BA '14. Their faith has been bolstered by moments confirming the rightness of a shrine to Our Lady of Guadalupe at the University of Dallas.

PHOTO: Liturgical artist Jaime Dominguez Montes' rendering of the sculpture of Our Lady of Guadalupe that will be housed in the shrine.