The son of Department Chair and Associate Professor of Philosophy Matthew Walz, Ph.D., MBA ’20, Damien Walz, BA ’22, grew up around UD and fell in love with its liberal arts curriculum. The decision to come to UD was a relatively straightforward one, but which major to pursue was not: Walz changed his mind approximately seven times before settling on politics.

As a homeschooled student, Elizabeth Regnerus, BA ’22, chose to skip her last year of high school, starting her freshman year at UD instead, a decision for which she is eternally grateful. “When I saw the quality of friendship, intellectual curiosity and vibrancy of faith students so clearly displayed, I was immediately confident that UD was where God wanted me,” she explained.

Catherine Schwenk, BA ’22, intended to double major in psychology and philosophy. However, after taking Principles of American Politics in the fall of her freshman year, she knew that politics was what she really was meant to study.

Thomas Thompson, BA ’22, had planned to go to the University of St. Thomas in St. Paul, Minnesota, where one of the professors astounded him “with his piercing intellect and charismatic lecture.” However, this professor was a UD alumnus who persuaded Thompson to look more closely at UD. “I realized that UD provided a better opportunity for me to truly learn and grow,” said Thompson.

First-generation college graduate Jeanine Dorrough, BA ’22, hadn’t even planned on going to college — then she received a postcard from UD in the mail and felt pulled to apply. Dorrough is particularly grateful to Director of Academic Success and Seven Arts of Language Matthew Spring, PhD ’15: “Soon after meeting Dr. Spring, he became one of my biggest role models. He is kind, generous, and shows genuine care to anyone he meets..

Entering into UD, Faith Starnes, BA ’22, planned to be a biology major, on a pre-physical therapy track. As a sophomore, she added a theology concentration, which opened her eyes to the beauty of theology and made her realize her deep love for the discipline. After Rome, she changed her major to theology, acknowledging an attraction and excitement for those classes that she did not have in the same way for biology. 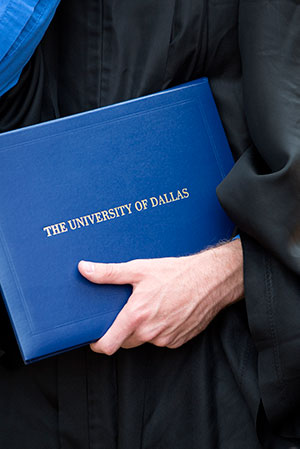