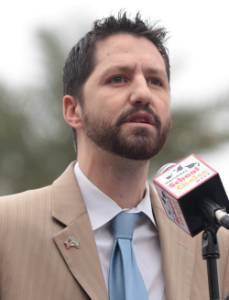 Paul Boyer is currently serving as an Arizona State Senator and teaching Senior Humane Letters and Junior High Latin at Glendale Preparatory Academy. He discovered classical education “by accident” after he won his first election to the state legislature in Arizona in 2019. Previously, he had worked a communications job at one of the largest school districts in Arizona, but under the Arizona Constitution he was forced to look for a new job where he was not considered a state employee. Teachers, however, are an exception to the rule, so he interviewed for a 10th grade Humane Letters teaching position at Veritas Prep in Phoenix, and he is now in his seventh year teaching with Great Hearts. Looking to further his education in the classics, he began looking into master programs, and he said “Once I saw the classes and the offerings of books to read at the University of Dallas, I applied right away.”

Before entering the Classical Education program, Paul received a B.A. in English and an M.A. in Communication Studies from Arizona State University. He began looking into furthering his education in the classics after he began teaching. It was important to find a program that would work with his already busy schedule. When asked how UD’s program has helped him both professionally and personally, he said “It has helped me to be a much better seminar leader and to understand the texts we read at a much deeper level. I was only scratching the surface and doing the best I could with my crazy schedule to understand these texts. UD helped me move much more quickly than if I attempted to understand them on my own.”

Paul is nearing the end of his program, and so far the classes that have stood out to him have been "Master Teachers in the Western Tradition," "The Trivium," "Philosophy of Education," "The Ancient World," and "Plato and Socratic Conversation." He says he is most looking forward to “defending my thesis on Plato, math, and certainty using the Timaeus, the Republic, and the Meno.” In addition to aiding in his teaching career, Paul says “It has also helped me to better explain classical education at the Arizona state legislature.”

When asked what advice Paul would give to those considering UD’s Classical Education program, he says “Do it! It’s the best program you will ever find. The professors are dedicated and care for each and every student. Also, we also get to spend at least two years in close readings with the best texts the world has to offer.” He has thoroughly enjoyed the classes he has taken so far in the program and cannot wait for the classes remaining and his thesis defense!