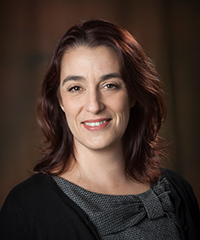 Estelle V. Fonteneau began teaching at the University of Dallas in 2013. In her graduate studies, she focused on nineteenth and early twentieth century European Art and women artists, with a special attention given to art education and the development of artist colonies in Europe at the turn of the century.

Estelle V. Fonteneau completed her B.A. at the University of Dallas with a major in Art History and a concentration in French Literature. She then attended the Institut d'Art et d'Archologie at the Sorbonne University (Paris IV) in Paris, where she received her Master and Ph.D. During her studies in Paris, Dr. Fonteneau attended the Ecole d'Art Plastique where she studied Studio Art.

Prior to her teaching at the University of Dallas, Dr. Fonteneau has taught Art History classes at Eastfield College and Art classes at the Dallas International School.

As an educator, Dr. Fonteneau was invited to participate in CONNECT, a two-year project (2009-2011) focused on improving the Dallas Museum of Art's web-based teaching resources. Dr. Fonteneau has been frequently invited to speak at conferences and events at the Dallas Museum of Art, the Rachofsky House and other North Texas institutions, on subjects ranging from Ancient Greece, Caravaggio, Impressionism and Marc Chagall to the Modern Masters from the Chicago collection. She recently wrote the interview and introduction for Michael O'Keefe's catalogue for the Valley House Gallery and Sculpture Garden 2014 exhibition.