My research, which was initially funded by the Nancy Cain Marcus and Jeffrey A. Marcus Chair in Science, involves photometric studies, data analysis, and modeling of cataclysmic variable stars (CVs).   Since then we have discovered  and classified a new dwarf nova, observed exoplanetary transits, and discovered new binaries.

Cataclysmic variables are binary systems in which a white orbits with a normal star.  The orbital periods of CVs typically range from approximately 0.05 day  to 0.6 day. These binaries are quite small by astronomical sizes.  The evolution of these binaries occurs through mass transfer from the secondary to the white dwarf. The luminosity of CVs is dominated by the accretion disk.  Strong tidal forces from the white dwarf pull hydrogen gas from the surrounding Roche lobe of the secondary and larger star through the L1 Lagrange point.  The gas spirals down around the white dwarf and usually forms an accretion disk.  If the white dwarf has a large magnetic field, the materials may be directed right onto the surface of the star. As gas accumulates, forming a shell around the white dwarf, thermonuclear fusion reactions can be re-ignited on the white dwarf.  These reactions can drive the temperature to the point where a nova explosion occurs in the hydrogen shell, blowing it and part of the white dwarf into space.  Below is an image from a VPython simulation I wrote to simulate the matter traveling through the L1 Lagrange point into the disc of the new dwarf nova J162520.29+120308.7, which we were among the first observe in July 2010. 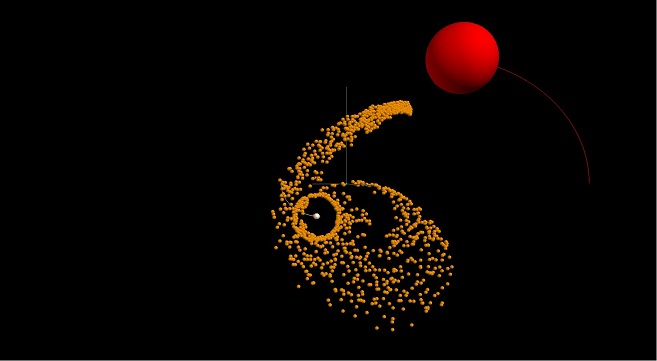 CVs have great advantages when it comes to data gathering:

They have relatively short periods, which makes them ideal for observation runs of a few days to weeks. They erupt frequently and unexpectedly, which makes them exciting objects to study. Their underlying physics mostly involves their accretion disks.  Being both bright and luminous primarily at ultraviolet blue and wavelengths, the accretion disks of cataclysmic variables provide checks on theoretical models.

Small observatory telescopes are well-suited for studies and by amassing large amounts of data over an observing season, we can build an observational record of good quality.

Shown below are V1331 Cyg (to the left) and V603 Aql which Josh Torres and Christian Clerc  began studying in summer 2003.  Not much is known about V1331 except that it is a pre-Main Sequence star embedded in a nebula.  V603 Aql, on the other hand, has been studied much, especially in x-ray wavelengths.  We are using it as a test of our data collection and analysis abilities and errors.  Christian's thesis outlines our error analyses.

To look for periodicity in the signals over nights of data taking, we make Lomb-Scargle periodograms of the data.  Below is a sample transform for V1331 Cyg.  Periodic signals can show up as "spikes" in the power spectrum of the transform, such as the one at  d^-1 in the graph below.  We are examining physical reasons for the different frequencies observed and also looking at the long-term behavior of the CV with Dr. Stanislaus Mel'nikov of Ulugh Beg Observatory in Samarkand, Uzbekistan.  Josh's thesis provides details of the analysis. 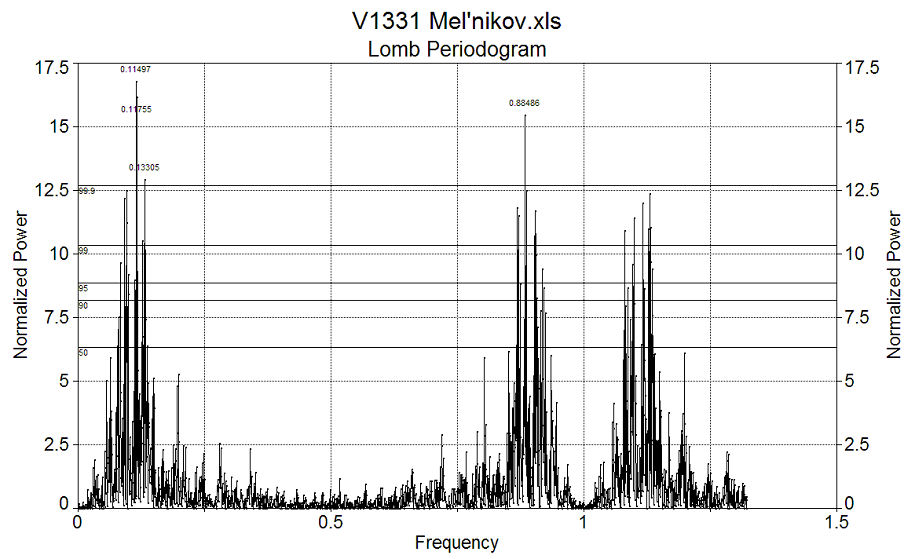 In the summer of 2005, Danny Malutich and Joe Meier took images of the CV V795 Her.  A sample of one night's data is shown below. 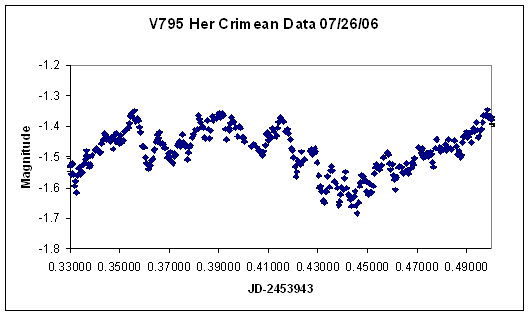 In 2009 we also started observing exoplanetary transits and received grants from Sigma Pi Sigma and NASA through the Texas Space Grant Consortium.  Below is the transit of WASP-3 observed with the 14-in telescope.