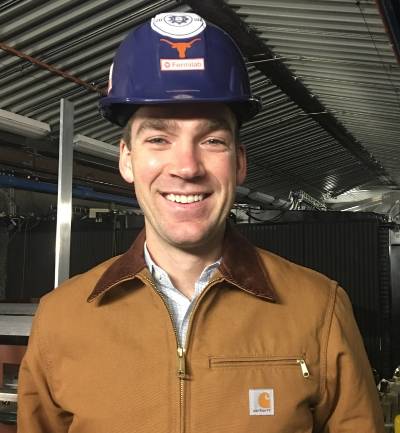 Dr. Will H. Flanagan received his undergraduate education at the University of Colorado at Boulder. Lured from astronomy research by the fascinating connection between cosmology and particle physics, he began doing Large Hadron Collider (LHC) phenomenology at Texas A&M through a summer Research Experience for Undergraduates (REU) internship. He then returned to Colorado to begin research with the Compact Muon Solenoid (CMS) detector as the LHC became operational.

Upon graduation, he moved to Texas A&M to complete a Ph.D., looking for supersymmetric dark matter particles produced through weak boson fusion. He moved to the dynamic field of neutrino physics during postdoctoral work at the University of Texas at Austin. During this time, he found a love for tinkering with particle detectors and mentoring undergraduate research.
All of the projects being conducted by Dr. Flanagan’s group, whether at Fermilab, CERN, or a nearby nuclear reactor, share a common thread of building the latest and greatest particle detectors.

In spring 2020, he was  awarded a $450,000 contract from the Air Force for his work in developing the world’s smallest neutron detector. Of this grant, $135,000 will go to UD to support Flanagan’s work with undergraduate physics students in the Physics Department at UD; the remainder will go to the small business colleagues in Austin with whom the UD team is collaborating.   Learn more here.