Meg McDonough (’21) completed an external REU with Texas A&M University Cyclotron Institute, performing research under Dr. Melconian. She helped to install and commission TAMUtrap, the world's largest Penning trap, at the Cyclotron facility. To commission the Penning trap, they performed mass measurements of stable isotopes; in doing so, they characterized and optimized the functioning of the ion trap so that it would be prepared to perform experiments with a radioactive beam on the V-A vector form of the weak interaction. She presented her research at the Fall 2019 TSAPS meeting.

Sarah Evans (’22) discussed her summer research project, “Electromagnetic Shielding for Low Level Biological Signal Detection” with a member of the TSAPS at the Fall 2019 meeting in Lubbock, TX at Texas Tech University. Sarah’s project developed a Faraday cage to insulate the biosensing instrument for electroretinograms in drosophila, developed by Mary Fox (’20). 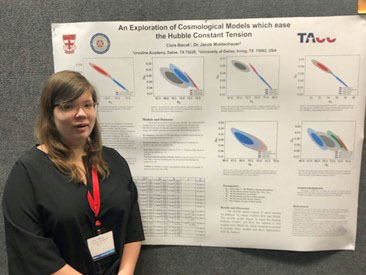 Clare Bacak (Ursuline Academy ’20) presented a poster at the Fall 2019 meeting of the TSAPS on her work with Dr. Moldenhauer investigating competitive cosmological models and explanations to tensions between different observations that measure the expansion rate of the Universe. 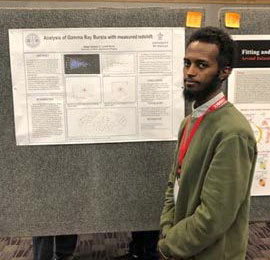 Samuel Tessema (’21) worked with Dr. Levente Borvak on an astrophysics projects during the summer of 2019. He presented the analysis of two types of gamma ray bursts (GRBs) at the Fall 2019 meeting of the TSAPS, which confirms an inverse relationship where GRBs which are fainter can be at smaller distances.

John Rabaey (’22) and Eniola Sobimpe (’21) presented posters at the Fall 2019 meeting of the TSAPS on neutrino physics projects they worked on with Aidan Medcalf (’20) and Dr. Flanagan, in collaboration with Fermilab. John (above) presented work on using a Stronium-90 gamma ray source to measure the accuracy and precision of the NOvA test beam time of flight experiment. John (above right, wearing safety goggles), is shown at work at Fermilab, a laboratory for particle physics and accelerator research. One of his tasks involved building a “trigger,” a device that would tell other, more complex detectors when to start taking data.

Eniola (below left, standing next to John) presented various prototypes constructed and tested for the NOvA test beam time of flight experiment. He (below center) continued his work started in summer 2018, where he constructed prototypes and tested them using developed Python codes. 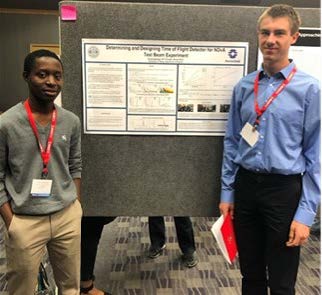 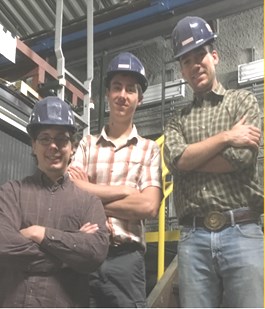 Aidan and John at the Fermi National Accelerator Labratory with Dr. Flanagan 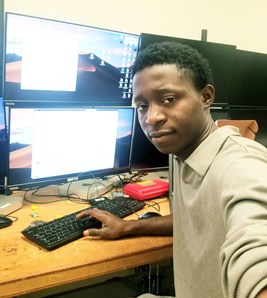 Sam Garza visited the Green Bank Observatory and attended a week long Radio Astronomy Boot Camp in Green Bank, West Virginia. Sam earned a coveted REU at the National Radio Astronomy Observatory. She looked at the relationship between star formation and dense gas using the new survey DEGAS and presented her work at the American Astronomical Society meeting in Hawaii.

Peter Hedlesky completed an REU at Louisiana State University in nuclear and astrophysics, developing a novel detector for answering some of the questions surrounding Big Bang Nucleosynthesis in the early Universe. He spent part of his REU designing, testing, and assembling a circuit board for a Position Sensitive Scintillator Detector and built a 3D printer to custom print parts for his research. He visited The Laser Interferometer Gravitational-Wave Observatory (LIGO) in Livingston, Louisiana.