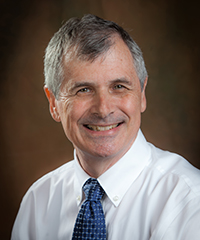 Dr. Mark Goodwin received his doctoral degree from Yale University and has taught in the Theology Department at the University of Dallas since 1993.  Dr. Goodwin's interests in scripture are wide-ranging, but are focused on the New Testament and its first century Jewish environment.  He taught for three years on the Rome Campus, and has served as Chair of the Department of Theology, Interim Dean of the School of Ministry, and the Faculty Senate.  Dr. Goodwin organized the outstanding Nostra Aetate event in 2015-16.