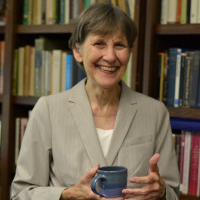 Eileen Gregory received her Ph.D. from the University of South Carolina. She has published numerous books and articles on lyric and contemporary poetry.

Disciplines of Lyric: For over two decades, in the context of deconstructive and marxist theory, literary criticism has dealt in a reductive and dismissive way with the category of "lyric" (lyricality, lyricism). "Lyric" in recent criticism has been a term for bad faith, for bourgeois denials of contingency. It is posited as a term in an abstract, dialectical opposition to narrative, the former carrying decidedly negative ethical valences, the latter positive ones. My current research engages this critical context, attempting a kind of "apology" for lyric. This entails establishing a fresh ground for understanding the nature of lyric and the readers engagement with it. I attempt to understand the complex question of lyric poetrys relation to the political sphere, emphasizing its fundamentally radical and subversive character. Lyric is deeply marginal with relation to the political order, but it presents a marginal view that is central to a fully human experience, emphasizing aspects of human life ephemerality, fragility, susceptibility that are ignored and repressed in daily life and in intellectual discourse. A lyric poet offers a kind of discipline, a distinct way of orienting attention and human responsiveness, a training in attentiveness to what William Blake calls "the minute particulars."

Contemporary Poetry: Other research and writing concerns a variety of contemporary poets whose work is a site for fresh exploration of lyric possibilities in conversation with traditional ones: Jorie Graham, following the metaphysical tradition of Wallace Stevens; experimental poets such as Kathleen Fraser, working in the tradition of William Carlos Williams and H.D.; Carolyn Forche, who in The Angel of History engages the elegy in a new way; and post-colonial poets such as Derek Walcott.