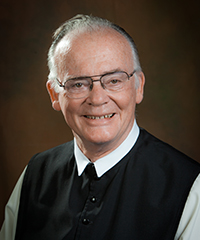 Fr. Robert Maguire received his Ph.D. from the University of Dallas. His research interests include Irish and Southern Literature.