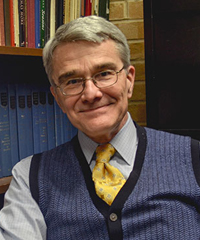 Gerard Wegemer received his Ph.D. from the University of Notre Dame. He is heavily involved in research on Thomas More, Shakespeare, and the English Renaissance.

Dr. Gerard B. Wegemer is a professor in the English Department at the University of Dallas and since 2000 the founding director of the Center for Thomas More Studies. (See www.thomasmorestudies.org.) He is currently co-editing the Essential Works of Thomas More, scheduled for publication in 2019 by Yale University Press, and he serves as an editor of Moreana, the international journal on Thomas More and his times. Among his recent publications are Young Thomas More and the Arts of Liberty (Cambridge University Press, 2011, 2013), Thomas More’s Trial by Jury: A Procedural and Legal Review (Boydell Publishers, 2011, 2013), A Thomas More Source Book (Catholic University of America Press, 2004, 2008), Thomas More on Statesmanship (Catholic University of America Press, 1996, 1998), and Thomas More: A Portrait of Courage (Scepter Publishers, 1995). In 2014 he supervised the completion of twenty-six online concordances indexing all of Thomas More’s works individually and cumulatively. He regularly teaches an interdisciplinary course on “Thomas More: Renaissance and Reformation” in addition to graduate courses on Shakespeare and on Early Modern England. He has master's degrees in political philosophy and in literature from Boston College and Georgetown University, and a doctorate in English literature from the University of Notre Dame.