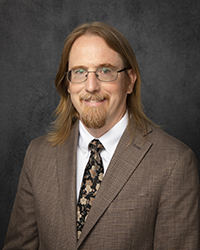 Dr. Mirus arrived at the University of Dallas in 2006. His interests include metaphysics, philosophy of science and nature, and ancient philosophy (especially Aristotle). He loves teaching Philosophy and the Ethical Life to first-semester freshman, seminars on Aristotle or on metaphysics to graduate students, and everything in between.

In and through his teaching, Dr. Mirus is engaged in rethinking the metaphysical legacy of Thomas Aquinas and of St. Thomas's Christian and pagan predecessors. He hopes to bring to this tradition a more adequate focus on the relationality and particularity of all that exists, on concrete human experience, and on metaphor and narrative as forms of understanding.

Being Is Better than Nonbeing: The Metaphysics of Goodness and Beauty in Aristotle. Washington, DC: Catholic University of America Press, 2022.

“Relation Is Not a Category: A Sketch of Relation As a Transcendental.” Proceedings of the American Catholic Philosophical Association. Forthcoming.

“Aristotle on Beauty and Goodness in Nature.” International Philosophical Quarterly 52 (2012): 79–97.