Both great leaders and great managers exhibit an exemplary clarity in thinking and communication.

Leadership and management are often seen as different activities, especially when management is defined as operational efficiency. Great leaders, for example, can be poor managers, as long as they have good managers working for them.  Excellent managers, on the other hand, can lack strategic sense, charisma, and visionary passion. But there are areas in which leadership and management overlap. Both great leaders and great managers, for example, exhibit an exemplary clarity in thinking and communication. 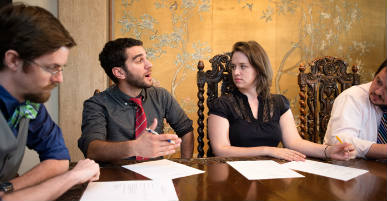 Such clarity can take many forms. Ulysses S. Grant wrote his orders with a clarity of prose and purpose that was instrumental in his ability to command his armies. Steve Jobs enforced a clarity of vision and design at both Apple and NeXt that defined these companies and their success.

I want to briefly examine a rather different and surprising example of clarity in leadership. From this example we can learn something of fundamental importance about leadership and management.

After the Second World War, the great mathematician, John von Neumann, collected and led a team of engineers, mathematicians, and meteorologists at the Institute of Advanced Study in Princeton, to develop a multipurpose electronic computer, called MANIAC. Jack Rosenberg, one of the brilliant engineers building MANIAC, describes the power of von Neumann’s intellectual leadership: “Johnny used to meet with each of us individually about once a week, asking what we had built, how it worked, what problems we had, what symptoms we observed, what causes we had diagnosed.”

Rosenberg was always impressed with how “[e]ach question was precisely the best one based on the information he had uncovered so far.”  But then Rosenberg reveals the essential power of Johnny’s questions as a mode of both leadership and management: “In about an hour he led each of us to understand what we had done, what we had encountered, and where to search for the problem’s cause.  It was like looking into a very accurate mirror with all unnecessary images eliminated, only the important details left" (Turing's Cathedral, 127).

His listening and questioning was itself a powerful mode of leadership. He helped them think for themselves, and in so doing he nurtured and intensified the community of mutual enterprise of which they were all a part ...

Johnny listened, he questioned, he re-described, he explored and became a clarifying mirror for his engineers. The clarifying force of his listening and his questioning was itself a powerful mode of leadership. Johnny did not tell his engineers what to think and do. He helped them think for themselves, and in so doing he nurtured and intensified the community of mutual enterprise of which they were all a part, leading to the paradigmatic success of MANIAC.

Brett Bourbon, Ph.D., is an associate professor of English at the University of Dallas and a consultant. He is a faculty member and former Director of the Master of Leadership program.

Connect with Brett Bourbon on LinkedIn.