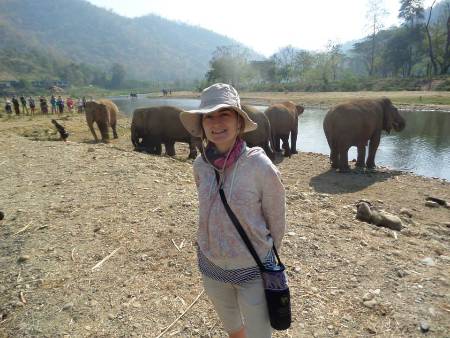 After graduation, Amanda spent a year and a half working at hotels in Irving and Dallas. She was saving up for a certification course, the Certificate in English Language Teaching for Adults (CELTA), which she was able to take in Minsk, Belarus in the summer of 2012. Following that, she applied for and was accepted into the English Program in Korea (EPIK), a Korean government program begun in 1995 to improve Korean students’ English abilities and to encourage cross-cultural awareness. EPIK hires teachers from countries where English is spoken as a first language and pairs them with Korean teachers in public schools. Amanda worked in EPIK for two years at the elementary school level. She now works at a similar institution, the Jeju Foreign Language Center, which consists of after-school classes for elementary to high school students, as well as night classes for adults.

“While I was studying abroad at UD’s Rome campus, I volunteered for the Marino Project, a one-credit course in which we got to visit a local Italian school and teach English to the kids there. I loved it so much and I also knew I wasn’t done traveling after Rome. Living and teaching in Asia has been a very fulfilling experience. I’ve had the chance to travel in Taiwan and Thailand, met so many great people from around the world, and gained valuable teaching skills.

Majoring in English at UD certainly helped me become a successful ESL teacher in a foreign country. When you study literature, you confront many different modes of thinking and feeling. Being able to understand the perspectives of others is important in any context, but while living abroad, it is absolutely necessary. Most of all, though, it was my professors’ patience and dedication that I have striven to emulate in my own classroom.”

Next year, Amanda plans on returning to her hometown to become a licensed teacher in Massachusetts.