As a senior at UD, Mary was torn between her passions for lyric poetry and for rhetoric and her lifelong dream of becoming a lawyer. While the study of the art of persuasion truly fascinated her, Mary was inescapably drawn to its practice. Just two weeks after completing her master's thesis on rhetoric in Shakespeare's Sonnets, Mary began law school at George Mason University School of Law in Arlington, Virginia. Mary graduated from GMUSL in May 2013, and she now works as a law clerk for Justice Jeannette Theriot Knoll on the Louisiana Supreme Court-the highest civil law court in the United States. 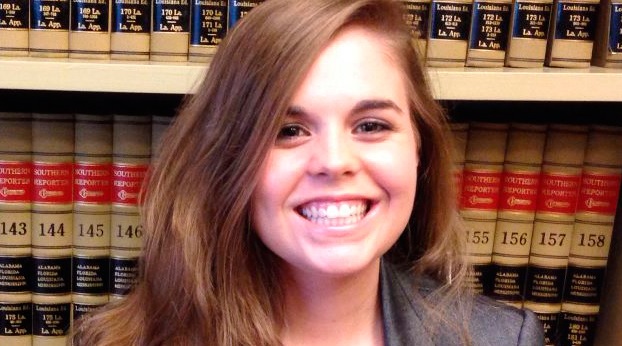 "It really did not take long for me to realize what an invaluable education I received at UD. I was using the skills I learned as an English major almost as soon as I started law school. UD's English program is unique in the country, perhaps the world, in that our English majors spend so much time with poetry, both lyric and epic. The technical training in lyric analysis that I first received in Junior Poet and further honed in later classes provided me with the best preparation for my future career. The myriad papers I wrote on lyric poetry habituated in me the ability to focus on the small details and to use those details to develop a persuasive big picture reading of a text. That is a skill I use every day when I'm reading and interpreting case law."

Mary's love affair with the great works she first experienced at UD did not end with her decision to practice law. Since leaving UD, Mary delivered a conference paper at the Jane Austen Society of North America (JASNA) 2011 Annual General Meeting, and JASNA published that paper in its journal, Persuasions On-line, on Jane Austen's two hundred thirty-sixth birthday.