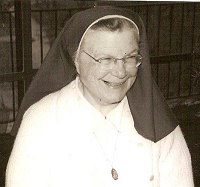 The Manning Award, presented each year by the English Department to a graduating senior, is named in honor of Sister Frances Marie Manning, one of the original members of the faculty of the department. As Associate Professor, Sister Frances served the University with dedication from 1956 until her retirement in 1985.  The cash award recognizes the achievement of a student whose work and whose presence as a member of their class has been consistently outstanding.

Sister Frances was a religious sister of the missionary order of The Sisters of Saint Mary of Namur, an order dedicated to education, and one instrumental in the founding of the University of Dallas.  A brilliant student who held a B.A., a B.S. in Library Science, an M.A., and a Ph.D. from the University of Ottawa, Sister Frances was also a poet, a member of the Shakespeare and Renaissance Societies of America, Campus Director of Canon Law Institute for Sisters, and a member of the National Council for Teachers of English.  She delivered many professional papers on a variety of subjects and received fellowships to study abroad, all while lovingly teaching her students at the University of Dallas for over 29 years.  Sister Frances died in 2000.

Of course He chose! We
should not question why.
He saw the Seedling sink its
tendons deep.
He watched as rocky soil
impeded growth.
He gazed upon leaves so prone
to be
The victim whom chance misfavored
by its choice
Of situations tempered most for blight.
He saw and what He saw He
loved.  He chose
The bloom that promised naught
apart from Him
And His solicitous engendering care.
He chose and meek responsive bud bowed low.