Under the direction of the Drama Department, the University Theater is an extracurricular organization that presents a series of major productions annually. While each production's acting company and technical crew is composed of students from every university program, those pursuing the course of study in drama have found that this opportunity to put their theoretical knowledge into exciting and challenging practice is essential to their growth in this field. The goal of the University Theater is to provide the University community with a repertoire of productions representing the most stimulating artists, forms, and visions from the world of drama. 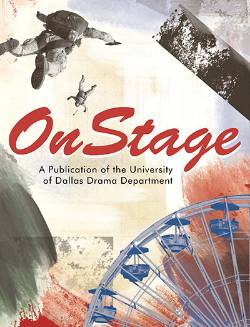 OnStage is a new publication from the Drama Department, a way for you, our audience, to engage more deeply with our productions. OnStage will be published once a semester and you can look forward to coverage which highlights our plays in performance with a focus on our major production each semester. OnStage offers a rich opportunity to enlarge and expand the ways in which we can interact with each other centered on the dynamic productions on our stages.

The Margaret Jonsson Theater, opened in the fall of 1972, was a gift to UD from the late Erik Jonsson, former Mayor of  Dallas and spearhead of the DFW airport project. Converted from a structure originally designed to be a chapel, the theater, named for Jonsson's wife, led a trend in the seventies to build campus theaters in found space. Featured in the April, 1973, issue of Planning for Higher Education, the MJT design, by Dallas architect Duane Landry, was praised for its thrust stage, surrounded by its 80-seats sharply stepped to provide optimum sight lines. Here the actor/audience relationship is direct and intimate; the playing space combines the best attributes of the Greek amphitheater and the Elizabethan thrust---a perfect place to perform a classical repertory. See Seasons for a full listing of upcoming University Theater productions.

Learn more about our shows on our UD Drama Department Facebook page.

Make a gift to help support the UD Drama Department.